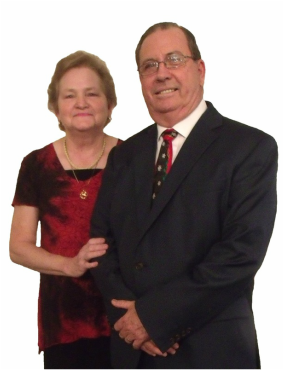 Neither of us were raised in a Christian home. We knew little about God but I always believed there was a God.   I am the third oldest of ten children.  My mother was a good woman, a woman with high moral standards.   She also taught us the value of hard work.  She talked of God all the time, but little was ever said about Jesus.  We did go to church a few times.  When times got really bad as they do in poor families, we would go to church for a few weeks.  When things got better, church was not so important.  I had the joy of leading my mother to the Lord after I was saved and I know she is in heaven today.  After she was saved she became very active in her church and even worked on the church staff, running the churches day care for several years.
I also had the joy of leading my step-father to the Lord 2 years before he passed away at the age of 72.  My real father died when I was 3 years old.

Gail was the oldest of 4 children.  Her mother left when she was 11 and took the younger children with her.  From that point on she was raised by her Dad.  After we were saved she was able to reconnect with her mother and two sisters and one brother.

God allowed us to lead both her mother and step-father to Christ.  Both are with the Lord now.  I also had the joy of leading Gail's Dad to the Lord.  He was saved at the Lighthouse Baptist Church, a church we planted in Lake Wales, FL He was active in the church until the Lord called him home.  Her step-mother is still serving the Lord there and is the last of the charter members in the church.

I met my wife when I was a senior in High School.  She attended another school in a nearby city.  We were married 2 months after I graduated.  I started a commercial citrus tree planting business when I was 20 years old.  The business was very successful. I made more money than I had sense.  Being raised in a very poor family, I was never taught anything about managing money.  I was living high, drinking and partying every weekend.  I had all the toys and material things I wanted.  We worked all over central and south Florida, so much of my work took me out of town during the week so I was spending little time with my family.  Then on the weekends I left my wife to care for our children while I was out with my friends, living it up.  Our marriage was on the rocks and we were months away from divorce court.  With all the money and things we had, we were both two miserable  human beings.

Then, one Saturday morning some bus workers from the First Missionary Baptist Church (now Trinity Baptist Church) in Lake Wales, FL knocked on our door.  I would not allow my kids to ride a church bus but before they left I had promised them my wife and I would attend the church the following day.  That Sunday the Lord began a work on my heart.  I did not get saved but I left that church under heavy conviction.  The following Saturday, the bus worker returned and as before I once again committed to attend the next day. Again, I managed to get out the door without getting saved, but not before the Holy Spirit did a number on me.  All that week I could not stop thinking about the things Bro. E.J. Brinson had preached that Sunday.  Friday night some personal workers from the church came to visit.  Before they left both of us asked the Lord Jesus Christ to save us.  The word divorce never entered our thinking again.  The night I fell in love with Jesus, I fell in love with my wife all over again.  He called me to preach four months later.
​
HOME     WHY NICARAGUA      OUR TESTIMONY      REFERENCES      WHAT WE BELIEVE
﻿   ﻿ OUR MINISTRY  ﻿           CONTACT US
DONATE﻿